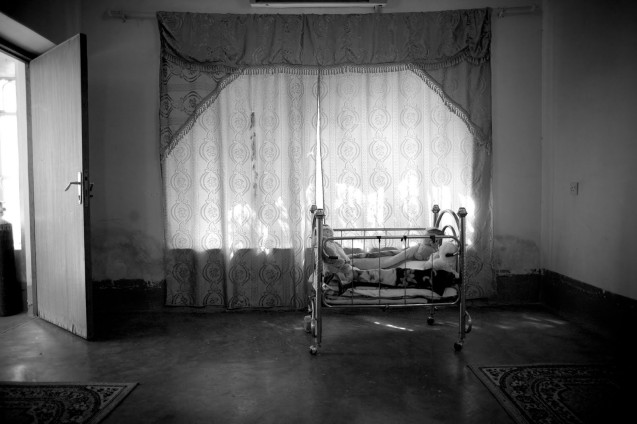 I put the umbrella behind the door; it hadn’t really helped me with the rain. How could it? The rain, like so many other things I had been experiencing, was unreal. I locked the door and double checked it, hoping she’d stay out tonight.

“I’m real” she whispered in my ear.

I turned around, not a sign of her. But she was there, I knew it. Talking to an overpaid lady as she pretends to hear me out hasn’t helped. All the medicines I was being forced to chug down, haven’t either. If anything, they were making her stay. All this scribbling over a notepad, and that feeling of being strangled and chocked by an inter-mixing of chemicals. All it does, is remind me of her even more.

As soon as I sat on the couch, the armchair opposite it sank under her weight. I tried to look away, and my eyes were greeted by our picture on the side desk. She sure was a looker. And then I looked across the table, how decayed and rotten she had become.
I loved her, anyway.

I turned on the television; it might help me stay sane. The man in the idiot box smiled. It was a smile of misfortune, even he pitied me.
“She won’t go away till you do it. You know that right?”
I changed the channel.

“He killed me, butchered me. All while you observed in silence”. Her voice was getting colder by the day.

“Look at me. Look at me”, she demanded my attention.
“Were you always lying…” her voice broke “…when you used to say that I’m the one?”

I was reminded of all the promises I had made, and she was quick to read my mind.

“Don’t you remember? We were supposed to be together. And it, it took me away. It separated us”

I hated it when she would call him an ‘it’. There was a cry from the master bedroom.

“Even now it wouldn’t let us have a moment of peace.” She snarled.

I looked at her. The skin below her eyes had dried and stretched to her lips. But her eyes, well they had remained as truthful as ever. She was right, as always. We were always meant to be. I had made her believe that I’d protect her, even in the most severe of times. And yet here I was, as helpless as I was then. I had failed myself. I had failed our marriage. But I could take all that, it was all the hate that she projected towards me that made me miserable.
A man can’t live a miserable life, can he? Not if he can do something about it.

I moved to the kitchen and opened the central drawer. I took out a knife; her smile visible at its sharp end.

She came closer to me, pulled me by the neck, and said.

I casually walked in to the master bedroom, where I had kept him, tied and bound to his bed. I leaned over and looked at him, the murderer of my wife. He looked back at me with his childlike innocence.

“Don’t let it get to you this time. Do it. And soon, we will be together again”. She whispered.

He cried. He cried for his innocence, for that is all he could do.

“Slice it. Slice it into pieces. Do it”. She shouted over my shoulder.

He looked at me with no remorse. He had no feeling of guilt, no sense of wrongdoing. How could he, that little devil.

I positioned the knife. He did not retaliate. In the background, I could hear her laughing.

I waited for it to say something, to convince me to stop. But how could he speak, he had been born barely days go. And so, I raised the knife and stabbed him thrice.

Her laughter faded away, and all that was left was a deafening silence. She had left me, finally. I wiped the grin of my face and proceeded to clean the blood that had dripped down the cradle.

4 thoughts on “Till Death Do Us Apart”

No comments yet? Your thoughts are welcome. Cancel reply